This weekend my gaming group bought the classic game Diplomacy 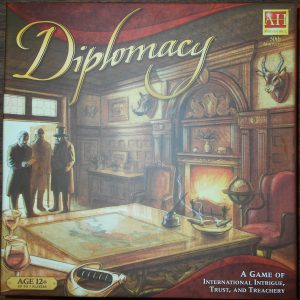 and broke it open for a test run. We were just in the mood for a game that did not use dice. We were in the mood to try our negotiating skills to win this challenging game. The premise of the game is that its the beginning of the 20th century and the major empires and countries of Europe are vying for position to take over the continent from Russian to England and from Sweden to North Africa. This game can be played by 3 to seven people. The Empires involved are France, Great Britain, Austria Hungary, the Ottoman Empire, Germany, Russia and Italy. The game play is simple and straight forward. Each country controls a certain number of armies and navies and they use them to expand their influence around the globe. As they take over supply centers they are able to get more armies and navies to expand their power. The key to the game is the diplomatic phase where the players negotiate and talk to each other making the back room deals that are symbolic of diplomatic negotiations. In those meetings you can say or promise anything to get what you need out of the other players but you are not obligated to do it. After the diplomatic phase is done the players go and write down the actual orders to their various units. After the orders are done the player commit the units to their moves. That’s where the players figure out who told the truth and who lied and thus who they could trust in future negotiations. The game is fast paced and fun. You have to keep a level head though and don’t hold any grudges, Its just a game. Now to the nuts and bolts of the game. The major components are the map, counters and the map aid pad. 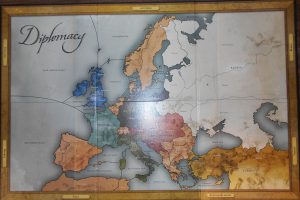 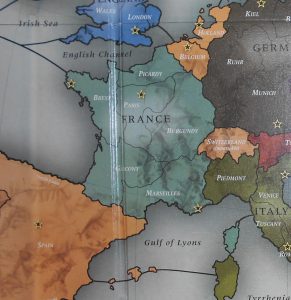 Diplomacy Board close up

The board is artistically drawn and gives the feel of old world aristocracy. It really puts you into the game. That being said it is not easy to play on this board. The boundaries between the provinces you have to move your troops through are faint and difficult to see. The board is also small for 6 or 7 people to sit around to play the game. Several times I had trouble seeing the board to figure out my moves. The other players could see where I was looking and had an idea as to what I was trying to do. 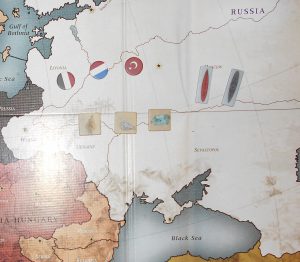 The components are made well and they are easy to handle. They are artistically created to again give the old world feel to this really good game. The problem is while they look great they are difficult to differentiate between certain countries. For example France and Germany look almost the same. In the course of the game several times I made the mistake of thinking that another country’s  piece was my French piece and I botched the move. Also the German and French flag pieces look similar as well and during unit construction and maintenance several times I added wrong and built the wrong number of counters. Finally the components were too big to fit in certain spots on the map. In some countries if you put a flag counter to show ownership and then an army in the same province you would have to stack them to make them fit. Then you might forget about one or the other piece. The stacked units make you look at the provinces where you are thinking about acting. In a game of deception you do not want to give your opponent any hints of what you are trying to do. If you have to lift up the British army in Belgium then there is a good chance the English player is going to know what you are planning and he will plan accordingly. The lack of distinction among the counters and the size of the counters made it difficult to plan my moves etc. So as good as the pieces look they actually hurt the game play. The most important game component believe it or not was the map aid pad with mini versions of the map so that players could carry them into negotiations with other players. 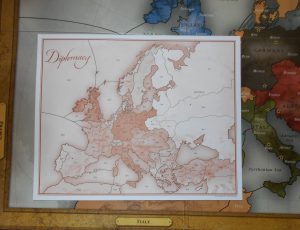 This map aid helped keep track of my units on the board and I had to use it to plan my strategy with the other players. It is actually easier to use then the game map itself. This aid made the game much easier to play and understand. Even with the flawed components we got three games of Diplomacy in. Each one was a lot of fun and I do recommend the game. Here is my final review.

I hope you liked the review of diplomacy. If you have any questions or suggestions drop a comment in my comment box. You can also contact me at bob@table-top-war-games.com. Don’t forget to check out our You tube channel J and D hobbies and our other web site www.theadvancedsquadleaderexperience.com for all the latest additions to the gaming world and for tutorials on Advanced Squad leader as well as munchkin. If there is enough interest we might even do a tutorial on this game as well.