Hello everybody. I am doing my weekly gaming post from my gaming group out of J and D hobbies of Massapequa. We have been  blowing the dust off old games and diving in. This has resulted in some of the most fun we have had in a long time. In my last blog you saw that we blew up the world over and over in supremacy. We decided to go back and try a simpler safer time so we dove into the 14th Century Mediterranean Sea with Serenissima. This game is basically a strategy game involving economics, trade and combat when necessary. 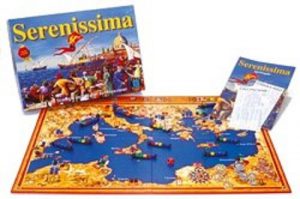 The economics involve obtaining various supplies like wine, wood, gems gold and several other commodities to trade in other cities to make money. The more prosperous the cities get the higher price you get for the items that you drop off there. The hard part is that commodity cannot be in that city already. This makes Gems and gold very valuable because they are only created in one or 2 spots on the board. Its a simple dynamic but very realistic in action. The combat is between the galleys of the various nations as well as between galleys and ports. It s very simple but it keeps the game going making it fun even for the youngest players. The components of the game are quite good. They are well made. The Galleys look like galleys and they function quite well in the rules of the game. The only problems I had with the components were inserting the various flags into the galleys and  the coins were cardboard covered with decals and they looked cheap. The commodities, sailors, galleys and forts all looked great though and were easy to use. We did not want the game to end. Eventually Jayden our youngest player who took the peaceful route through trade, negotiation and only fighting when absolutely necessary won the game. It was the first time for all of us and by the second turn we had the game rules down and were having a blast. This game is going to be added to the frequently played pile at J and D hobbies. I highly recommend it for family fun night. Let me know what you think of my blog and this game and any of the other posts by contacting me at bob@table-top-war-games.com. You can find out all the latest news in the world of Advanced Squad Leader at my other site www.theadvancedsquadleaderexperience.com and keep track here for news about all the other games in the gaming world. My next post is going to be a review of the newest addition to Games workshop Warhammer Underworlds Shadespire. Keep checking in with us for all the latest and greatest news in the gaming world. 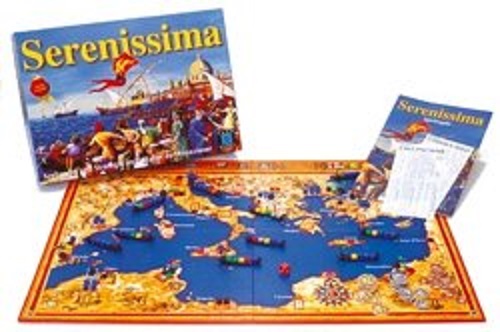 Best place to get Amazon

Over all rating 9/10 almost a must have!