Hi everybody. I recently obtained a copy of Fantasy Flight Star Wars X wing miniatures game. I’ll review this game from the looks of the packaging in. 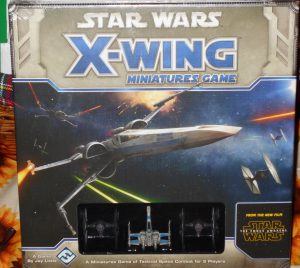 The packaging itself is beautiful, You can see the two pre painted Tie fighters and the pre painted X wing stowed away carefully, you know exactly what the ships look like before you buy the game.

The back of the box has all the game components displayed and it gives you a real feel of what the game looks like while you are playing it. The way this package looks this game would be a great gift for star wars fans of all ages.

After opening the box the game components are organized well and sealed so they cannot get damage. Excellent presentation. Now comes the important part. Before opening any of the components, you will be tempted because they are great looking, you should read the learn to play booklet first. It takes you step by step in the assembling of the ships as well as the all important putting together of the maneuver dial of each ship. 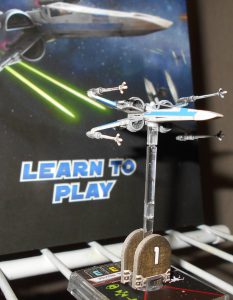 Learning How to play X Wing

Now it is very important to follow the tutorial. There is a simple battle set up between the 3 ships with the two tie fighters siding against the X wing. The instructions in the tutorial are Ok but they are lacking in several introductory issues which are important. I would suggest the first several play throughs concentrate on learning how the maneuver stencils work. Don’t worry about firing. You need to look at the diagrams as you maneuver  your ships. 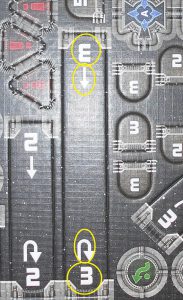 In a nutshell if you choose a maneuver for your ship, in our example we picked the three inch straight piece, not only is the distance travelled important but also the direction the ship is facing at the end of the maneuver .On one end there is a straight arrow on the other side there is an arrow reversing direction. Those maneuvers will also appear on your maneuver dial of your ship if it is allowed to do that maneuver. It will also be in different colors depending on the amount of stress the pilot suffers while doing the maneuver.

If you have chosen the 3 with the straight arrow during the planning phase, place the ship front facing points one on each side of the stick and then move the ship until the back points on the stand are touching the stick on both sides of the stick. If you chose the 3 with the arrow turning back on itself you would move along the stick like before but at the end of the maneuver you have to turn the ship 180 degrees so that the front points are touching the stick again. I would practice all the maneuvers available to your ship several times and get to know them really well. The diagrams are small but try to use them to figure out the maneuvers. This game is a game of maneuver. You need to know how to fly these ships before you can do anything else. In future posts I will be posting examples of some of the maneuvers and show how firing is done.